Will your dog protect you? 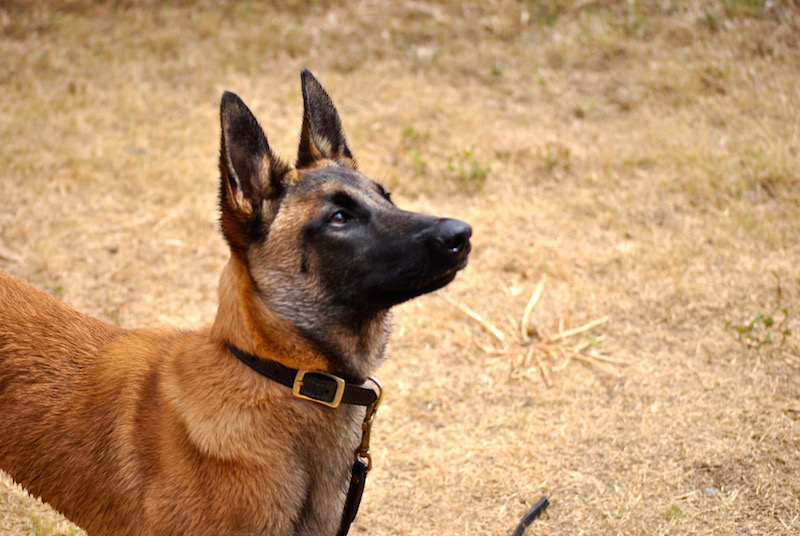 A few cars peppered the massive dirt lot when I arrived. I pulled up slowly, positioning my truck towards the back to avoid the onslaught of human, dog, and vehicle traffic that would inevitably tire the dogs I had in tow.

Before exiting the truck, I surveyed my surroundings, scanning the cars to see who had decided to join us for training that day. The cars were unfamiliar, a new group of dogs and handlers I didn’t know. I hopped out of the truck and made my way down to the training field.

As I trudged across the lot, I passed a number of vehicles. A small hatchback sat adjacent to the training field, sticking out like a sore thumb against the backdrop of trucks, trailers, vans, and SUVs. With its windows rolled halfway down, the massive head of a large Shepherd protruded, extending as far out of the tiny car as he could reach and threatening any passerby that got too close.

Not knowing the dog, and taking into consideration that this was a venue for protection K9 training, I gave the car a wide berth. The dog locked his sights on me, throwing his chest against the window, gnashing his teeth and barking ferociously as I passed. I glanced at his bared teeth, gave him a little chuckle, and moved on.

While I wasn’t about to stick my hand in HIS car, I didn’t take the threat display too seriously.

Moments later, Eric, my good friend and colleague arrived, pulling his truck into the lot just next to mine. Since this was his first group bite work session with his puppy, I walked up to meet him and introduce him to the crew. I explained field etiquette as we walked back across the lot, making our way to the training field.

As we approached the small car, the dog began his display again, saliva flying from his mouth as he showed his teeth and barked loudly. Eric started, tried to brush off the fact that the K9 caught him off guard, and followed with a few choice comments in his typical fashion.

“If that dog gets out and bites me,” he said as he kept a good distance from the car, “I’ll stab him.”

I chuckled and followed with a simple response. “Don’t worry about that dog,” I said, “he’s all talk.”

As he typically does, Eric wrote me off, completely avoiding the Shepherd for the rest of the morning.

When it finally came time for the dog in the car to hit the field for some training, he calmly sauntered onto the field, puffing out his chest as he passed by the onlookers positioned on the sideline. His appearance was impressive.

Holding him by his harness, his handler signaled the man in the bite suit to approach. They were ready to face their adversary.

As the decoy stepped onto the field, the dog began his tirade all over again, barking ferociously and exhaustively, flashing his saliva drenched canines, and standing the hair along his back on end, giving the appearance he was twice his actual size.

The decoy kept coming, slowly closing the 70 or so yard gap in between himself and the Shepherd.

The dog growled, barked, and threw himself into the end of the leash, warning the decoy to stay away.

The dog intensified his warning, showing his teeth, saliva streaming from his lips.

The dog’s display continued, but he took a few steps backward as the decoy closed in.

The dog barked loudly, now positioning himself behind his handler completely.

The dog quieted to a low growl, completely hiding himself from the decoy, his body shrinking down to what appeared to be half its original, puffed up size.

The dog quieted to a whimper, tucked his tail, and laid down, urinating a little when he did.

I glanced at Eric, whose mouth gaped as he watched the events unfold. When the dog finally succumbed to his fear and sought avoidance, Eric broke his stupor, looked at me, and gave a puzzled, yet approving nod.

The owner of the dog was visibly baffled and, quite honestly, a little shaken. This dog whom she believed to be her knight in shining armor was ready to feed her to the decoy if it would mean saving his own skin. 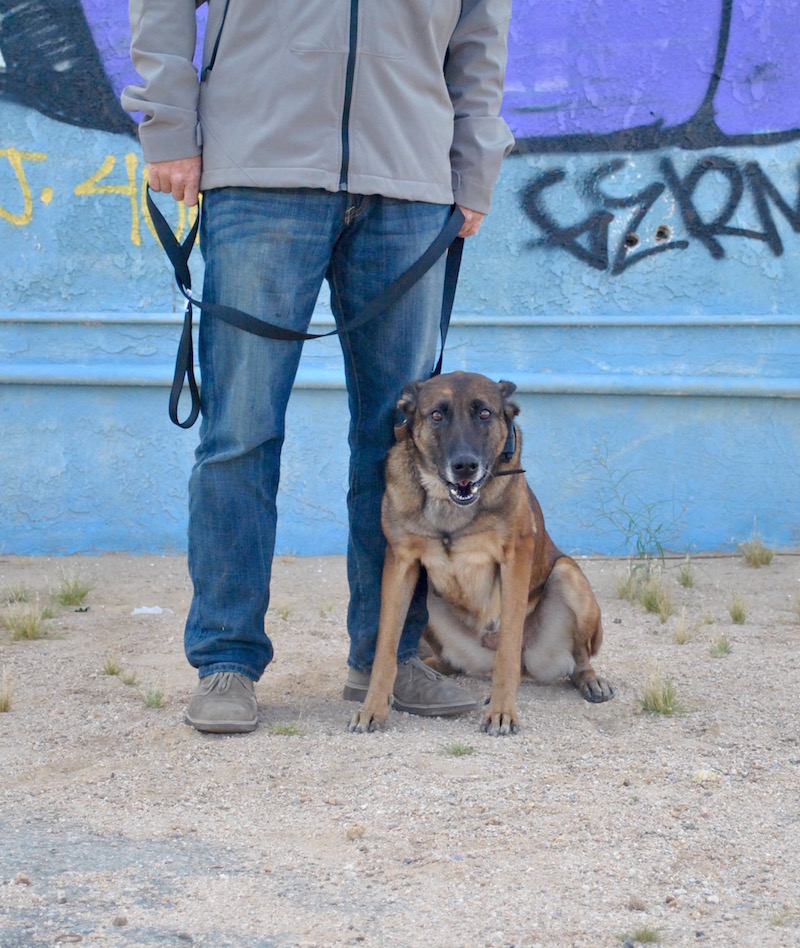 Most dog owners mistakenly think their dog will protect them if a threat presents itself. Devoted dog owners often proclaim, “He may seem sweet, but if someone really came after me, he’d change his tune.” Or, “He loves me… I know he’d lay down his life for me.”

After having worked with aggressive dogs and private security K9s for more than a decade, I can tell you without a doubt that those statements simply aren’t true. Sure, the display that many dogs make when faced with a threat is typically enough to scare off potential intruders – but those behaviors are typically rooted in fear, an unstable emotion that can easily escalate to avoidance, should the threat persist.

Think of a protection dog like a Navy SEAL. They go through intense, painstaking training in order to face adversity head on in a calculated and effective manner.

Now think of your average person, whose training consists of tips they got from watching the news. Hand that person a gun, don’t teach them how to use it, and dump them square in front of a threat. How will they perform under pressure?

If you’re talking about me, I’d likely end up shooting myself in an attempt to ward off an intruder. That, or I’d panic and just hand them the gun, offering them my wallet and all of my personal belongings before they could even make the demand. I might sound tough, but that’s all a direct result of being surrounded by a pack of dogs who bite. Without them, I’m a pansy.

Not only do most dogs perform very poorly under pressure, but the fact of the matter remains that the dog that barks at strangers aggressively with hair raised is likely doing so from a place of fear. As fear is one of the most unstable emotions a dog can experience, if the dog does escalate to real aggression, the response will be emotional instead of calculated. He will be frantic and thoughtless – a dangerous scenario when dealing with a biting dog.

We don’t send Navy SEALs out to protect our country without extensive training and conditioning. We don’t expect people to perform under pressure without teaching them how. And we certainly don’t send our police officers out on the street to keep us safe without considerable instruction. So how can we justify trusting an untrained K9 with our safety…with our lives?

Just as not everyone is cut out to be a Navy SEAL, realistically, not every dog is able to keep you safe. While you might have high hopes for making an executive security dog out of your beloved Fido, your pup simply may not be cut out for the job. But don’t worry. With the right trainer, you can easily teach deterrent behaviors (bark with no bite) that can help ward off intruders or threats to you and your family.

If you’re interested in having a dog that you can trust to protect you in the face of adversity, do your due diligence and talk to reputable trainers with extensive experience. If you aren’t comfortable with a trainer or their methods, don’t be afraid to speak up and go elsewhere. When it comes to security dogs, there is far too much at stake to cut corners or work with someone you don’t trust.

Regardless of whether you choose to train up your own pup, buy a working puppy and train it yourself, or buy a trained security K9, seek the help of a professional and ensure that the training is customized to your life. And most importantly, just because your dog barks at strangers DOES NOT mean you can entrust him with the safety of yourself and your family – as much as you love him, he could simply be all talk.

Check out this video when a protection dog trainer put a couple of family pet dogs to the test.

Meagan has been training dogs professionally since 2002, most recently working with private security, military and law enforcement to provide security and detection K9s for high level applications. She owns both The Collared Scholar, an online dog training academy, and 690 Security Services, a company that trains and deploys Executive Security and Protection K9s to private customers. She recently partnered with both Average Frog and SM Leaders, who repurpose the proven performance principles of the Navy SEALs for individuals and organizations. FOLLOW HER ON FACEBOOK